The last 9 days have seen our work in Cebu has seen a lot of progress.  On December the 13th Sean arrived from Dublin together with a big bag of medical supplies. Sean’s primary task was to carry out a medical needs assessment in the areas that we were planning to operate in. Back in Ireland Sean is a Paramedic/firefighter with Dublin Fire Brigade. He also holds an M.Sc. in disaster management from DCU. 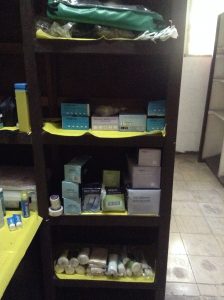 The day after Sean’s arrival him and Eric traveled to Arapal Camp to start phase one of the wifi network installation. Eric had brought an Aruba Networks 3600 controller and a number of AP135 WiFi access points. These were installed in the main building to provide internet access. The network will be backhauled via a VSAT connection. 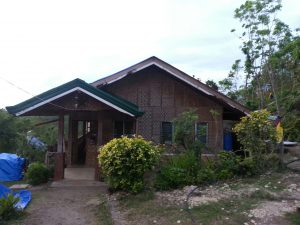 The house where the network was installed.

The installation for this stage was fairly straightforward from an IT perspective. The controller would be installed downstairs and the 2 AP’s would be placed inside the attic-space of the building. But this not being a typical “western” building there are risks of moisture and other aspects that could damage the access points. Enclosures were needed but not at hand. Our volunteers were quick enough to enlist the services of a local carpenter. A design was worked out on a piece of paper and the carpenter started fabricating custom-made AP enclosures on the spot! 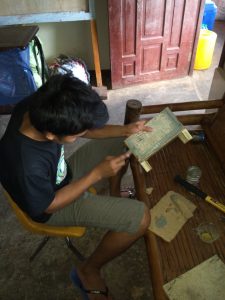 Building the base for the AP enclosure 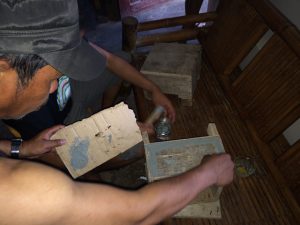 Sealing the joints to waterproof the enclosure The underside showing the ventilation openings The Aruba Networks AP135 inside the enclosure

While it looks quite basic there was a good bit of thought put into the design. The top and sides are waterproof with sealed joints.But the whole enclosure is raised on a set of short legs and has ventilation slots cut into the underside for both cooling and to prevent condensation. After the AP’s were put into the enclosures they were installed in the attic with cat-5 cabling running along the outside of the building down into the main room where the controller was placed. The whole lot was them wired up to the camp generator for power and tested. The wait is not on for the VSAT equipment which is en-route to Cebu. We tried using a 3G router as a temporary solution but there was simply no cellular coverage to support that. 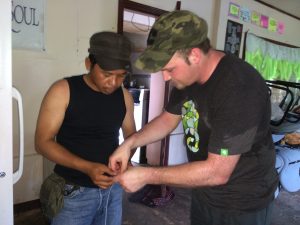 Eric and one of the local crafts people 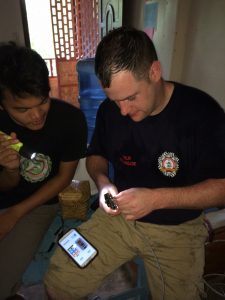 Sean and one of the local people at Arapal Camp 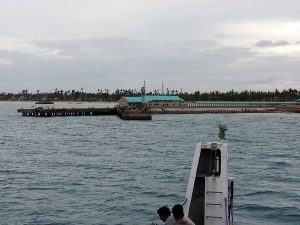 On December 16th Eric & Sean traveled to the island of Bantayan. This island had been badly damaged by typhoon Yolanda but because most of the media and large NGO attention had been focused on Tacloban and surrounding areas it had received very little assistance. Most of the relief work on Bantayan was being carried out by individual volunteers or smaller relief organisations. We had been alerted to the situation by people from Third Wave Volunteers, a volunteer disaster relief organisation who we had worked alongside on several occasions before.  The guys traveled by car from Cebu and tool the ferry from San Remigo to Santa Fe, the capital of the island. They were met there by Laura, a volunteer who we had first met during our Sandy response nearly a year ago. Laura had been on the island for a while already and had built up a good situational awareness. She was joining our team to assist in carrying out a thorough medical and comms needs assessments. 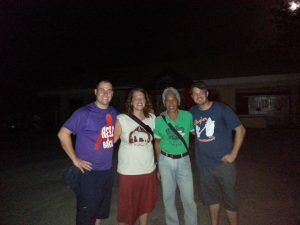 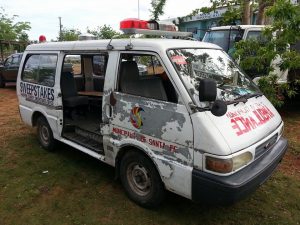 The next day was spent meeting the mayor of Santa Fe, local authorities and representatives from organisations such as BVERT, SAMU, Oxfam, Shelterbox, and more. It became clear very early on that almost none of these had acceptable levels of internet access or communications. Aid workers were forced to travel several miles to the few public locations with Internet access. A truly unworkable situation. What was even more worrying was the lack of proper medical facilities on the island. With over 100,000 people currently on the island only the basic medical facilities were available and emergency care, of standards that we westerners are used to didn’t exist. The urgency of this would prove itself shortly. The state of the level of healthcare is best illustrated by the below picture of a local ambulance:   The next day the team and specifically Sean got an opportunity to prove their value. A warning came in that two Oxfam volunteers had been involved in a serious motorcycle accident. Sean set out in the only available ambulance to triage the casualties and provide the necessary medical care. It became clear very quickly that the medical facilities on the island weren’t prepared to cope with the seriousness of the injuries. Not being one to sit still Sean coordinated with BVERT (Barangay Volunteer Emergency Response Teams) and SAMU (Spanish emergency response organisation) and decided to take an ambulance and together with a volunteer make the 3 hour journey, by ferry and road, to a hospital in Cebu Metro which would be able to provide adequate care for the patients. As you can imagine this was quite an epic journey with Sean constantly monitoring the patients and providing care when needed. The outcome was that both patients made it to the hospital in Cebu alive and are currently undergoing further treatment there. Sean skills, initiative and medical supplies made a lifesaving difference. 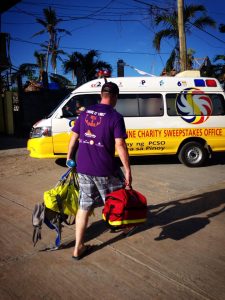 Sean rushing to the ambulance carrying his grab bags.

While Sean was working on a medical needs assessment Eric was busy meeting with representatives of all the different relief organisations working on the island as well as with the mayor to build a picture of the communication needs. It became clear quite quickly that none of the organisations had anything close to acceptable communications. Relief workers were travelling long distances to a few public locations which offered wifi access but this was neither a practical nor efficient solution. We are currently coordinating the communications efforts for the various organisations. Repeated requests were submitted with the large NGO’s who are supposed to assist in the provision of VSAT services but as this has provided zero results we have ordered and paid for VSAT equipment ourselves. This equipment is due to arrive in the Philippines shortly.

While our work continues our costs do to. Please support our work by making a donation using the following link: http://www.gofundme.com/5fz3ts