Following our experiences during our deployment after Superstorm Sandy we learned that a wireless signal assessment done early in a deployment is of considerable value in assessing the availability of communication services in a disaster area. The results of such a survey will both show communication service black-spots as well as white spots where no temporary or permanent new infra-structure is needed. Gathering, visualising and sharing this data helps to determine what telecoms services & data services are available and where gaps in service need to be filled. Based on all this we started carrying out a wireless signal survey in the area of Moore affected by the tornado.  We used the latest Google CrisisMap (http://bit.ly/17VVnMO) as an indication of the path taken by the tornado and covered as much of that area as was possible by vehicle.

The vehicle followed the street grid criss-crossing the path of the tornado as much as possible. At this time the Android tablet as well as the iPad polled for WiFi networks at short intervals. At the same time the signal strength on both phones was visually monitored. We had hoped to automatically monitor the cellular network using a an app which is under development by OpenSignal but the app is still in a very early alpha stage and wasn’t yet stable enough to produce accurate results. At the end of the survey the results from the Android & iPhone apps were both exported to *.KML files for import into Google Earth. We had planned to use Google Maps but the number of WiFi networks detected exceeded the maximum import level for Google Maps so we had to switch to Google Earth instead. We are currently in contact with the Google Maps team to see if this issue can be resolved.

The total number of WiFi networks detected was 932. Only 11% of these networks were “open” and hence available for public use. The remainder was using mostly WPA encryption but surprisingly 5.5% still used WEP encryption. In addition of the total number of 923 at least 10% were mobile 3g/4G to WiFi devices (Jetpacks, MiFi’s etc). These were most likely used by disaster response teams deployed to the area.

The cellular coverage survey gave a surprising result with nearly 100% coverage on both AT&T and Verizon 3G & 4G networks across the area surveyed. This can be due to the fact that certain celltowers & base-stations covering the affected area might have been located outside the direct path of the tornado. In addition the various cellular companies response to the damage caused was substantially faster than after Sandy (for comparison). 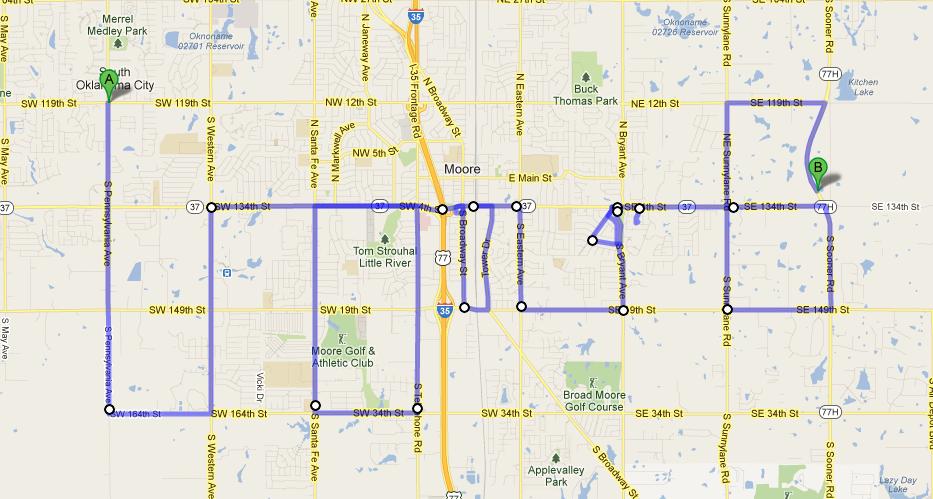 The results of this survey indicate several two points; firstly there is a plethora of wifi networks active in the area. While a lot of these where pre-existing to the tornado there are a significant amount of temporary networks which are part of the disaster response.  Based on this it shows that correct channel management is an important issue when using WiFi as part of disaster response communications in a “first world country”. Secondly the survey shows that within 3-4 days of the tornado passing through Moore nearly full 3G/4G & LTE coverage is restored. This means that with the right equipment a lot of the temporary networks can be routed over the cellular data networks rather than using VSAT which is significantly more expensive. It also indicates that at this stage it would be wise to reach out to the cellular providers to determine whether these would be willing to donate 3G/4G/LTE to WiFi routers and temporary dataplans. Based on the outcome of that the installation of VSAT terminals should cease and existing VSAT terminals should, where possible, be replace by the above devices.