As part of our analysis of the post Superstorm Sandy disaster response we’ve compiled a “wireless communications assesment”. The content of this can be read below:

In the aftermath of any disaster occurring communications provide a vital component of the disaster response effort and the same was the case after superstorm Sandy hit the US east coast on October 29th 2012. For Haiti Connect it initiated our first deployment in the USA and as communications is our area of expertise we decided to carry out a (limited) assessment of the impact on the existing telecommunications services as well as provide recommendations to improve future disaster response efforts. As most of our work concentrated on the Rockaways area the majority of data will apply to that area but logic dictates that the impact and recommendations apply to most other areas also. The assessment will concentrate on the technical areas and does not include the economical or financial impact.

The combination of high winds and localised flooding caused extensive damage to above ground and subterranean telecoms infra-structure:

In the seafront regions of NYC, such as Staten Island, Rockaways, Lower Manhattan etc. communications were knocked out completely. Towers and mast were damaged and underground ducting was flooded or completely washed out. The same went for cable services infra-structure which was largely run in underground ducts. Combined with widespread and long-lasting power outages this has caused a widespread complete blackout of communication services.

As recovering and rebuilding telecoms cabling infra-structure is costly and takes a substantial amount of time the two types of services that are the most suitable for use in disaster response situations are cellular and WiFi based.

Our initial response in the days following October 29th was to map telecoms outages as well as available services. The initial goal was to map cellular services, landline and public wifi. However as the telcos are reluctant to share real-time data on outages I was depending on crowdsourcing this data which only provided limited results for landline & cellular services. However we had more success with wifi services. We contacted a number of WiFi hotspot providers and had a lot of luck with Boingo (one of the largest wifi hotspot aggregators). They assigned someone in their NOC to geo-locate all traffic and report to us with live hotspots in the NYC area every 6 hours. These were then imported into the map. We also downloaded and converted the list of wifi hotspots from the NYC OpenData website and included this in the map as a separate layer but as we could not verify uptime this wasn’t much use in the end. The resulting map can be found online: https://sandycommsmap.crowdmap.com/

During this period we also assessed the response by the cellular & cable providers. There was a fast response from most but the lack of coordination between them caused a lot of problems. Most cellular providers deployed COW (Cellular On Wheels) service which is basically a truck mounted cellular base-station with its own power supply and mast. However the placement of these was very uncoordinated and as there is only a limited amount of radio spectrum available for cellular communications this caused cross-network and cross channel interference to the point where even the temporary services became unavailable or un-usable.

WiFi services were also rolled out by us in the Rockaways area from November 5ht onwards. This was followed by a few other organisations providing the same on an incidental basis. At that point all wifi networks were being backhauled over satellite and the Sandy response saw an increase of Ka-Band VSAT terminals while previously Ku-band had been the standard. Ka-Band is significantly faster offering higher download and upload speeds but is more susceptible to bad weather conditions (rain especially). On top of these services VoIP services were deployed in a number of locations.

Following the initial response cellular services started to slowly come back online and in the period between December 9th – 16th we carried out a number of signal test surveys in the Rockaways to ascertain the level of available services. 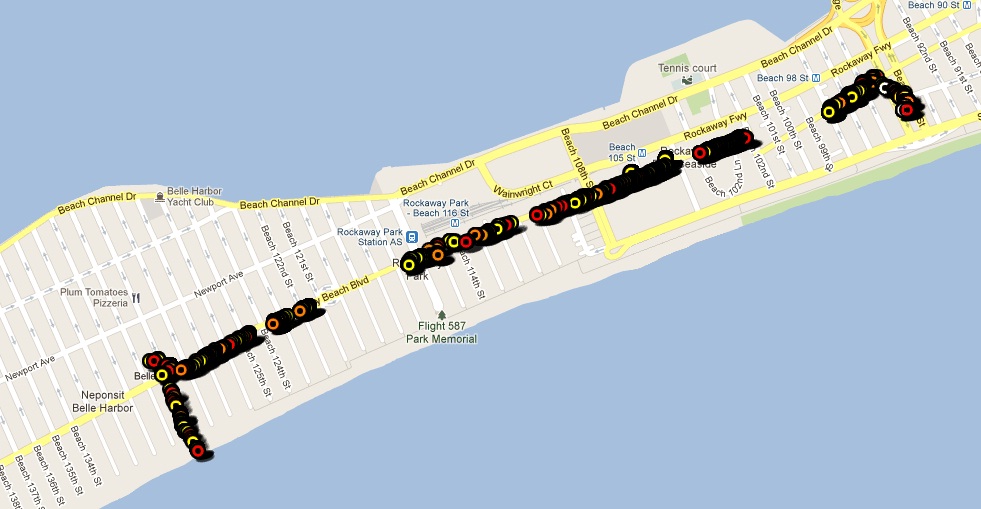 At this time wireless services have been restored to acceptable levels to support the relief and rebuilding efforts. While most of the residents might not have a 4G or LTE subscription the establishment of public internet locations in warming tents or command centres should meet their short term need until terrestrial services are restored.  In addition the restoration of FIOS, which is really a wired services, using wireless backhaul will increase connectivity in essential locations.

While the current level of service restoration is of an acceptable level there are a lot of opportunities for improvement in the immediate response period (1-2 weeks). Currently there is no acceptable level of coordination between the different telcos, between the telcos and the local government and between the telcos, the disaster response organisations and the local government.  In short chaos is king in the current situation. There seemed to be no single points of contacts within the carriers that the various response organisations could contact to request service updates, report outages or coordinate communications response efforts. My recommendation is that relationships are established (or expanded) with the carriers, Fema, NCC, FCC and NGO’s operating in this field. If these relationships are pre-established and a level of trust is built then telcos will quite likely overcome their current reluctance to share data on outages.

Single points of contact will also speed up communication so that situational awareness during disaster response will significantly improve. Current efforts are very much on an ad-hoc basis or done by individuals within their trusted circle without sharing data with other organisations.

I have started a discussion within the Fema Innovation team about the formation of an “operational and intelligence support team” and it’s my opinion that the above would fit perfectly in the remit of such a team.

The full report can be downloaded here and is available under a Creative Commons Attribution-ShareAlike licence.